The changing face of the corporate video production industry.

This is an extract from an article written by Jimm Fox of One Market Media on the The changing face of the corporate video production industry. It's a great read and offers information on price structure by different providers. As highlighted in the article, the line between production companies and experienced cinematographers is becoming more remote as camera gear are becoming more powerful and cheaper. Features that were only found in high end cameras are now included in prosumer cameras which are often more flexible in their work flow.

Technology has had a dramatic effect on the video production industry over the last 5 years. A few years ago video production was a highly specialized service that required very expensive equipment. Today anyone can pick up some cheap equipment and start making videos. At the same time many businesses are starting to embrace video, primarily on the web, as a means of reaching their audiences with engaging and persuasive new content. It’s both the perfect storm and the perfect opportunity for providers and purchasers of corporate video production services.

I am often asked about the state industry – how it’s changing, where it’s going, so I created this brief summary of how I see the industry evolving. The numbers are my own – based on observation, research and discussions with other video productions companies.

The two principle distinctions with this group are 1. Experience and  2. They are usually one person businesses. Whatever their legal business structure (i.e. sole proprietor or incorporated business) this group have been shooting for a while – both for their own clients and also doing freelance work for larger video production companies. Some of these guys (over 90% are male for some reason….) specialize in weddings or events and some do mostly corporate work. The big change for this group is that they are doing more now than ever. They are having to sell and promote themselves in different ways. They are being squeezed by the equipment owners on price but they are also competing for the first time with the larger video production companies. It’s okay today if you are a one man band. It didn’t use to be -  primarily because it was very difficult (and expensive) to do it all. Today you can. Many videographers used to be just shooters, either because they didn’t want to do editing or they didn’t want to appear to be competing with their principle source of income -  the next group in the food chain – the video production companies. {Interestingly, you are also seeing video production companies downsizing to three, two or one man operations working from home – again, because the market and technology allow this to happen and also because the ongoing cost pressures demand it.

Video Production Companies - (Trend – this group is experiencing the most pain, the numbers of these providers are shrinking)

The traditional video production companies (two or more staff and lots of experience) are getting squeezed from both ends. They are seeing tremendous price pressure and are not able to sustain the same high rates that used to comfortably pay their overhead. Big studios, lot’s of expensive equipment, layers of management and admin are all luxuries that few production companies can afford today. Most people in this group started in video – doing sound, doing lighting, etc. The entrepreneurs eventually started their own production houses. Having experience isn’t enough, however. Sure, the market will still pay for experience – but what it will pay is a moving (lower) target. The other challenge this group is facing is that they are seeing people with other talents and backgrounds (i.e ad agencies, marketing consultancies, online media companies, etc) jump into the fray. The traditional video production companies will argue that these new entrants don’t have the required video production skills but the reality is that the market places more value on ideas and application than on technical competency. Shaky camera, focus hunting, imperfect lighting and a litany of other video transgressions are not only acceptable today, they are sometimes preferred. New entrants often shape a market in strange and wonderful ways…

Having great video production skills today are becoming table stakes for higher end productions. The next level is application – what do you do with the video. 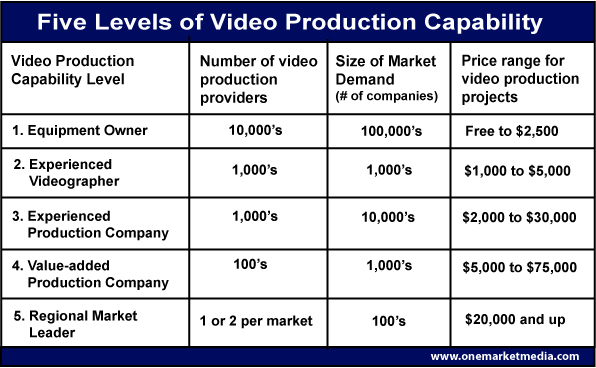 What our Customers Are Saying

Most people retain 95% of the message in a video compared to only 10% of what they read in text.

We pride ourselves in
Taking your vision and
Turning them into visuals.